“I’ve read this book before and its sequel. I’ve seen both the movie, it’s remake and I’ve seen the stage play,” commented Frank Hawkins, President of Hawkins-Poe. “It’s been my experience over the past fifty-five years in this business that every seven to ten years there’s a market adjustment. The causes are seldom the same, but most often it’s an economic crisis caused by an overheated economy. The cure always results in the same outcome; the Federal Reserve increases interest rates to slow inflation and the real estate market slows as a reflection of the increased cost of financing home prices,” Hawkins recounted.

As reported by the Northwest Multiple Listing Service: “The volume of closed sales, at 5,194 was the lowest level since February (5,147) and January (5,085). While the volume slowed, when comparing January’s median price of $555,000 with last month’s median price of $575,000, it demonstrates that buyers paid 3.6% more on average. While this is slowing the rate of increase, it has not yet demonstrated a decline in home values area wide.”

Inventory statistics were mixed. Brokers added 4,890 new listings during November, a decline of 24.2% compared to the same month a year ago when they added 6,455 new listings. At month end, there were 12,245 total active listings, a whopping increase (about 165%) from the selection of a year ago when there were only 4,621 active listings. Measured by months of inventory, November’s supply, at 2.36 months, was the best since January 2019 when the overall selection reached 2.4 months of inventory. Four to six months is considered to be neutral.

Just like in the stock market, the housing market leans in the direction of concerns over market gains and market losses. Unlike the stock market, your home provides you with security, safety, life-style, interest tax deduction and over time, significant wealth. As you can see from the average appreciation in Pierce County in the past years, home owners have been the winners. While home sellers have lost the advantage, there is still a considerable home price appreciation. You can see the gain using Pierce County’s average home prices as an example:

“This increase in inventory and stabilizing prices are providing savvy buyers with much better purchasing options. The trick is, buyers need to be prequalified, they need to search for creative financing options like an interest rate buy down, and they need to be prepared to refinance when mortgage rates decline (which they will)”, Hawkins concluded. 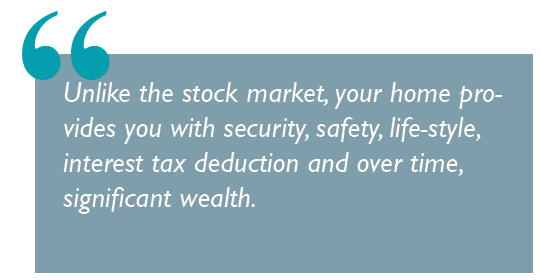