A new report from Northwest MLS shows brokers added slightly more new listings last month (11,373) than a year ago (11,210). That volume, which includes single-family homes and condominiums, nearly matched the total for August (11,437), and barely outgained the number of pending sales
(11,318) for the 26 counties in the report.

Within the Four County Region (King, Pierce, Kitsap and
Snohomish) compared to the same month a year ago, closed sales slipped about 8%. Despite that drop, Frank Hawkins, President of Hawkins-Poe, noted that number of closed sales
in that Region made last month the second-best September, going back to 2003. Last year’s 4-county total of 8,606 pending sales is the highest volume for that time frame spanning nearly two decades.

“It appears the ‘Fed’ intends is to continue with low interest rates into the near future. That combined with low inventory levels will continue to pose challenges for Buyers,” Hawkins
commented.

At month end, Northwest MLS members reported 7,757 total active listings system-wide. That marked a slight improvement from August when there were 7,425 active listings, but it was a drop of nearly 14.8% from twelve months ago.

At the end of September, there was about three weeks of inventory (0.75 months) down from (0.89 months) the same month a year ago. There has not been more than one month of supply since July 2020 when it reached 1.04 months.

“While one could expect months of supply to increase around the end of the summer, shortage of supply still remains a significant issue, indicating demand still exists in many submarkets,” observed James Young, Director of the Washington Center for Real Estate Research at the University of Washington.

Young contrasted strong price increases in nearly every “outer suburban” county along I-5 plus Kittitas County with prices in King County. He noted nearly all of the outlying counties posted YOY increases at or above 15%, while King County experienced only a single digit gain of 6.7%. Prices in Kittitas County, where destinations like Suncadia and Ellensburg are within a two-hour drive to Seattle, surged more
than 26% from a year ago.

“With decreases in active listings in King and Snohomish counties, price pressure may increase in urban areas of the region as people return to the city for work,” suggested Young. 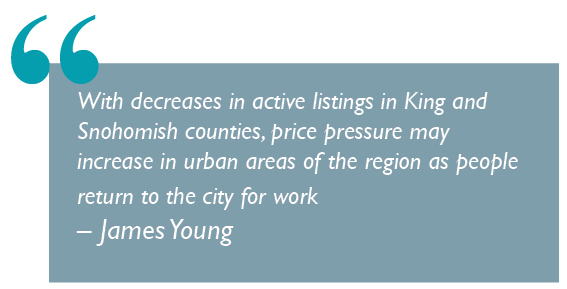